BEFORE THEY WERE FAMOUS

Bowes Lyon House was host to many acts in its early years that were unknown but went on to fame and fortune. A look back at the autumn of 1965 gives us two good examples.
In 1965 Eric Clapton was well known as the lead guitarist in The Yardbirds but he left when they started to play more pop songs in an effort to get into the charts. He joined blues band John Mayall and the Bluesbreakers and toured with them.

Although highly regarded they were not commercially successful. They did not play huge venues and were featured at Bowes Lyon House on   Thursday 21st October 1965. 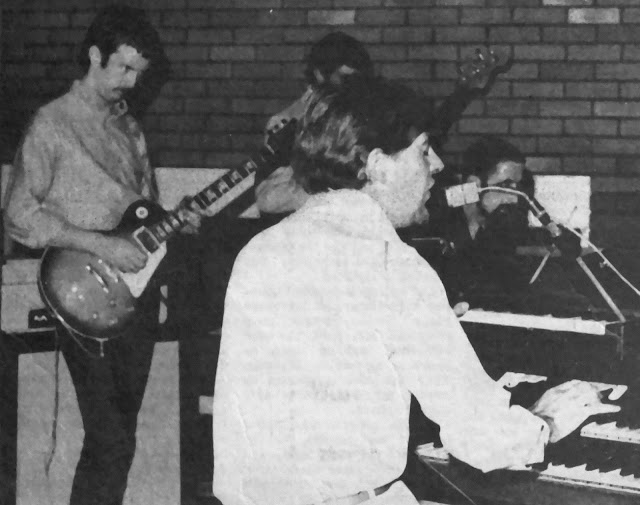 Eric is clearly visible on the left of this picture with the famous Bowes Lyon brick wall behind him. The press did not name-check him and the only newspaper comment afterwards was that "the group is high in the list of popular Blues Groups." Eric appeared on one album with the group and left to form Cream in the summer of 1966. 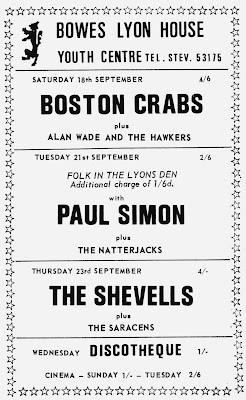 Paul Simon had appeared at Bowes Lyon House a few weeks earlier. On Tuesday 21st September, for a grand total of 4 shillings, you could have attended Paul’s performance in the “Lyons Den”. This was much smaller than the main hall and used for folk acts and solo performers.

Paul’s appearance did not warrant a newspaper review and the only witness I could find said the show was poorly attended and Paul sang “very quietly”.

Paul played many similar venues in the UK in 1965 following the release of an album called “The Paul Simon Songbook”. This record was not a success. Soon after he returned to America, joining up again with Art Garfunkel to promote a single called “The Sound of Silence”.  By February 1966 it was a worldwide smash and the days of appearing at small venues like Bowes Lyon House were long over.